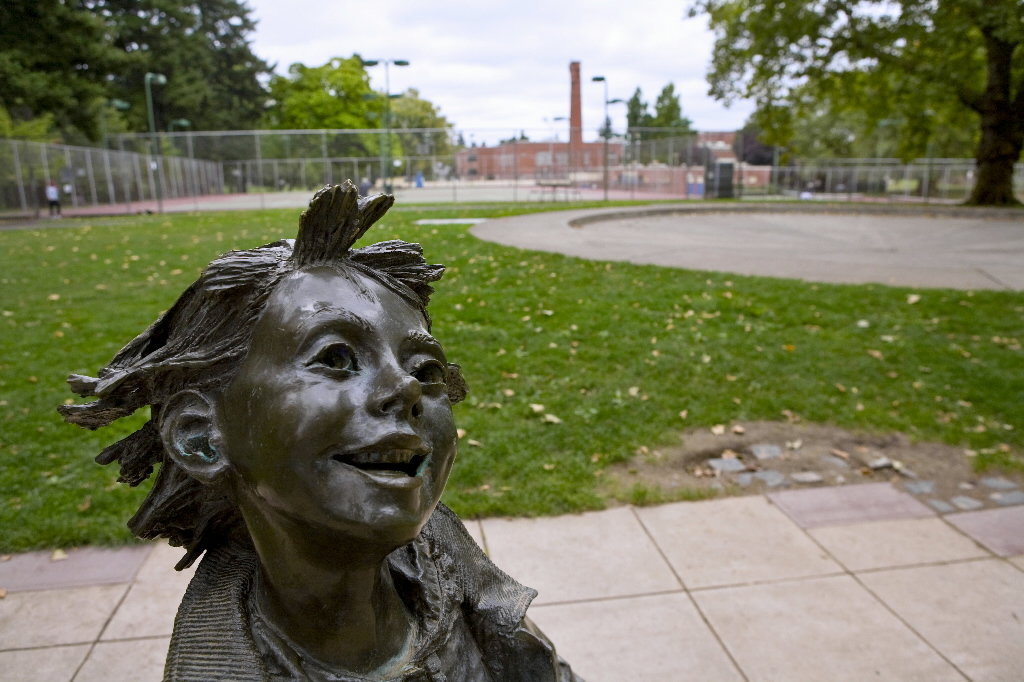 Raising a native Oregonian—as much as an outsider can do such a thing—has taught me some things about having a regional identity and the ways it shapes one’s imagination and sense of self.

When we first moved to Oregon, the first thing I noticed was a faux license plate on someone’s car, proudly or exclusively proclaiming: NATIVE OREGONIAN.  The sign looked like something sanctioned by the state: a designation requiring application and official approval, like a passport.

I don’t know about Oregon yet, but I want to be a native somewhere.

I was born in Philadelphia, Pennsylvania, moved to Baltimore, Maryland when I was twelve, attended college and lived in Chicago for eleven years, had a four-year stint in Washington, D.C.,  then three years ago moved to Portland, Oregon for a job. I’m not complaining about these moves—it’s been a grand adventure—but my head is spinning.  Truthfully I don’t know why people do this to themselves.

Each time we moved to a different city, I experienced the same inarticulate vertigo: a vacant, lost, numb feeling that we had done something primordially wrong, an intuition that we had violated some ancient code, inscribed in our human genes, not to stray from the tribe. If one traces the roots of the word inhabit back through the Old English and the Latin, one discovers that it contains a trace of the word to have.  To possess or own, perhaps in a spiritual sense.  Place belongs to you, an ineffable possession, and you belong in it.  Recently I was re-reading Eudora Welty’s classic essay, “Place in Fiction.”  Having lived her whole life in a town in Mississippi, Welty wrote, “Place absorbs our earliest notice and attention, it bestows on us our original awareness; and our critical powers spring up from the study of it and the growth of experience inside it.”  In Welty’s fiction, this real sense of place is married to her imaginative conjuring; it is the wellspring of her short stories and novels, providing the spiritual infrastructure for each piece she wrote.  But my sense of place, of where I belong, of the traditions I come from, is woefully scattered, diluted by so many influences, so many brief, searching sojourns.

Once you have lost the comforts of being native, the sense of place, you can’t get it back.  But what have I really lost?  What does it mean to have a regional identity, to be a native?   Why in fact do I feel I need a regional identity, that I am missing something essential to my spirit?  “Where does this mystery [of place] lie?” Welty asks.  “Is it in the fact that place has a more lasting identity than we have, and we unswervingly tend to attach ourselves to identity?”

Just after we arrived in Portland, our baby daughter was born.  Miriam Rose is a native Oregonian, almost three years old and going strong.  Raising a native Oregonian—as much as an outsider can do such a thing—has taught me some things about having a regional identity and the ways it shapes one’s imagination and sense of self.

“Location is the ground conductor of all the currents of emotion and belief and conviction,” Welty wisely observes.  It’s the rainy season here, the gray, wet, puddle-splashing season that will be with us for up to six months, more our regional norm than any other season.  At our house we can’t get enough of puddles.  As soon as the rainy season starts, we are suiting up—much the same way children in colder regions get ready to play in snow—and heading into the wetness.  Splashing in puddles is a sport and an art for an Oregonian toddler.  There are big puddles and small puddles, deep and shallow, wide and narrow.  There are muddy puddles, which on parental advice we try to avoid, and puddles of clear water.  There are the ocean-like puddles that form in autumn when the street drains are clogged with leaves and Miriam can wade in up to her knees.  Some puddles are mirrors that bring the sky onto the earth.  Puddles can be splashed in, tapped with stray branches from trees, and examined for reflections, waves, and stirrings.  Puddles invite mischief and adventure and fun, contoured to the shape of the street, the duration of the storm, the particularities of the day.

I am not an aficionado of puddles or rain or gray or dampness.  Even though we come from the same gene pool, this season is not normal to me in the same way it is to Miriam.  Rain makes me uncomfortable, cold, and wet.  I worry about my clothes getting drenched and my hair getting flattened.  It’s all new to me, but I follow my native Oregonian’s lead.

After the rainy season, puddles are missed, longed for, talked about, and recreated.  The imagination takes over.  In summer we spend at least one day each week at Grant Park, where there is an outdoor sculpture and fountain display that celebrates the writings of children’s author Beverly Cleary, a Portland institution, who authored a series of books about a character named Ramona.  At the Grant Park display, a bronze statue of Ramona is frolicking in the fountain’s spray, raincoat blowing in imaginary wind, laughing, face upturned to the sky.   No matter how dry and sunshiny the weather gets, this fountain keeps the memory of puddles alive.  One of the pink marble bricks contains a quote from Ramona the Pest (1968), proclaiming an Oregonian child’s mantra:

Only grown-ups would say boots were for keeping feet dry.  Anyone in kindergarten knew that a girl should wear shiny red or white boots on the first rainy day, not to keep her feet dry, but to show off.  That’s what boots were for—showing off, wading, splashing, stamping.

On summer nights, in our supposedly dry apartment, old baby blankets are kept in reserve and spread out throughout the living room and dining room, “pretend puddles,” for after-hours, off-season practice.  The “pretend puddles” take on all the identities of the real puddles outside—the deep, the ocean-like, the shallow—and Miriam hops and splashes and gets her little brother Julian wet with imaginary spray.  Baby blankets also open up a new imaginative vista, as nighttime brings us puddles which are yellow and pink and patterned with teddy bears and race cars.

When my brother and sister-in-law came out from the east coast, where they have lived all their lives, they and their three children spent a week with us at Manzanita on the beach.  This was one of those family vacations that had a disproportionate amount of hand-wringing.  Prior to the trip, my brother, who had made a staunch pitch for an Atlantic ocean vacation, kept asking, “An ocean you can’t go in?  But where will we swim?”  Even though I tried to explain the fun of sand castles, kite-flying, walking, and splashing in the waves, he remained unconvinced.  They came somewhat grudgingly and, once here, spent an inordinate amount of time looking for indoor pools for their children, who couldn’t tolerate the idea of not swimming.  Each afternoon they would leave to go swimming and, after they were gone, Miriam and I would go out to the beach, which was brisk and windy and left our faces ruddy, and run up and down, hand-in-hand, splashing in the surf.  On this particular stretch of beach, there were hundreds of wells formed in the wet sand, full of warm, sparkling water: ocean puddles!  While my brother and his east-coast family swam indoors in the chlorine, we spent hours exploring each one.

What I have learned from raising a Native Oregonian has helped me to understand what, in all my movements through the world, I have lost. Welty continues: “From the dawn of man’s imagination, place has enshrined the spirit; as soon as man stopped wandering and stood still and looked about him, he found a god in that place; and from then on, that was where the god abided and spoke from if ever he spoke.” As I stop and pause in my wanderings, I can reflect on the beauties of staying still, of absorbing and studying where I am.  I will use this small child, my native Oregonian, as my lens.  Like a puddle, shaped by the contours of the street, the duration of the storm, the quality of light, I too can reflect the sky, the greater world, from a particular, local, vantage point.  And in fleeting, welcome flashes of appreciation, I can sometimes find myself in that nexus.

I think I am coming into this reading about several years too late :) But that just beckons a follow-up piece on having raised a native Oregonian. It would be especially interesting to hear about the educational differences and mentality traits of your child versus yourself when considering place as an influential factor.