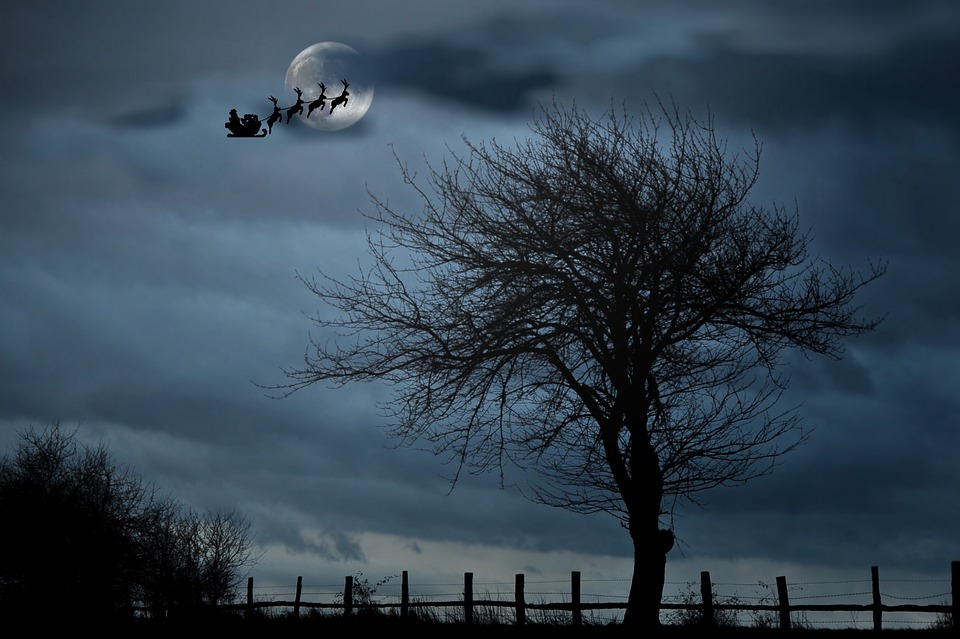 No, Julian, There is Not a Santa Claus.

What was I thinking, at the ripe, old age of eleven, stubbornly believing in such a fantastical quasi-religion, when stories to the contrary were legendary on the playground? How could I have been so slow to grow up?  How could she have let me be so un-cool?

Every year my children and I go around in circles about the existence of Santa Claus.  As a parent, I’m a realist.  I’m clear with them that Santa Claus is a story, a fun game that parents and children can play, but not a real person who squeezes down chimneys and fills faux stockings with toys.  Unfortunately, every year we are surrounded by store displays, mall impersonators, dusty knick-knacks, television shows, videos, books, and songs that proclaim a more colorful truth: He Lives!

At least on the surface, when I tell them Santa is not real, Miriam (five) and Julian (three), nod and agree.  But recently, when we went to the toy store to purchase gifts for less fortunate children—“playing Santa Claus” I tell them—they slip, reminding me that mine is a minority opinion. “But why doesn’t the real Santa Claus take care of those kids?” Miriam asks.

My empirical bent comes from my own sense of childhood betrayal.  I remember the moment keenly.  My fourth grade teacher, a woman who perpetually frowned, having just called off a wedding that would have allowed her to quit her job, was talking about the winter holidays.  At one point she looked at us students and asked—too cavalierly—“You all know there’s not really any Santa Claus, right?”

“Oh sure,” I answered, glancing at my peers.  “Yeah, he’s pretend.”  But I was seething.  How could they have lied to me?  I was furious at my parents for perpetuating such a ruse.  Each Christmas I endeavored to reach new heights of errand-running, room-cleaning, floor-sweeping, homework-finishing excellence, always surpassing the previous year’s performance—all in the belief that some kindly Big Brother was making approving judgments about what he was observing.   It was an obsession with good behavior—for nothing!

My mother’s role in this conspiracy bothered me in particular. After many roller-coaster years of trial separations and reunions, my father had finally, mercifully, decided to leave.  In my mind, my mother was the good guy, the trustworthy constant, against the foil of my father’s erratic role in my life.  This would be our first holiday as a single-parent family.

That night I waited until I got her alone.  We had just driven home from the grocery store and were getting ready to get out of the car.  “The teacher told us that there’s really no such person as Santa Claus,” I told her, staring hard at the dashboard.

“Oh dear,” she responded and sighed.  This news was not the biggest disillusionment of the season for her.  “So now you know.”

How could everyone be so cavalier about the crumbling of this illusion?  “You told a lie,” I pointed out to her.  Part of my frustration, I have to admit, was at myself.  What was I thinking, at the ripe, old age of eleven, stubbornly believing in such a fantastical quasi-religion, when stories to the contrary were legendary on the playground? How could I have been so slow to grow up?  How could she have let me be so un-cool?

There, on the cusp of what would turn out to be a stormy adolescence, I would not forgive her.  I can never believe another word she says, I thought to myself, a thought that inaugurated the cynicism that would guide me through those teenage years.  It wasn’t just the illusion of Santa Claus that left me.  My mother, too, was diminished in my mind.  Long after she parked the car and went inside, I sat sulking.

Now, at almost forty years old, with their imaginations continually fired up by images of the bearded codger, my children have invited me to revisit this faded, old grudge.  I’m starting to wonder if my mother did lie after all.

Miriam and Julian spend the better part of each day pretending, and I’m struck by how profoundly real their imaginary games are to them.  Asking them directly to do something—like putting on their shoes—is rarely effective if I request it directly.  But when I put it on their terms—

Regardless of what I think is their good fortune of having a realist for a parent, pretending is their lifestyle choice.  The other night Julian asked if it was possible to email Santa a last-minute change to his wish list.  I reminded him that Santa is just for fun and telling me about the change was enough.

To my surprise, as if he were slipping out of his imaginary lifestyle to offer an editorial remark comprehensible to my adult mind, Julian said, “But, Daddy, I really want Santa to be real.”

Maybe my mother didn’t intentionally mislead me after all.  Maybe, like my own children, there was a part of me that needed to believe, even when I was as absurdly old as eleven.

Greek tragedies are known for presenting human catastrophes and then resolving what seems to be an impossible dilemma through what’s called a deus ex machina, “a god out of the machine,” who descends by stage machinery and magically brings order to the chaos on the stage.  Santa Claus is my children’s deus ex machina.  Probably he was mine as well: a mental placeholder for that important hope—such an abstract concept to a little kid—that charity can occur to right inequities, that deserving children will be rewarded, and that kindness is possible.  And maybe that’s what faith is, regardless our creed or denomination, and why it gives us such sustaining pleasure: it keeps us focused on those pockets of order and “rightness” in the world, those real possibilities, in spite of underlying actualities which are painful, uncertain, and far less than fair or orderly.

This Christmas I have no trace of that old grudge.  I am not so bogged down in “the truth.”  In fact, I have reclaimed a bit of seasonal wonder.  And when I stop typing my story, I will call my mother and wish her a Merry Christmas.