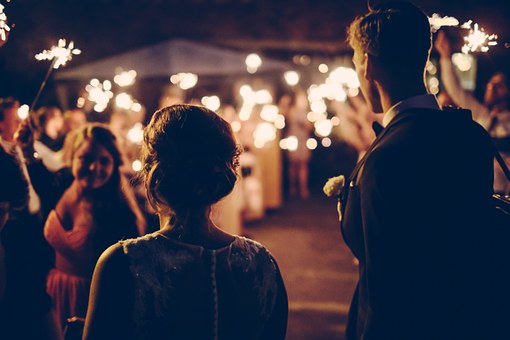 Bumping into Clients at Weddings

“Hey Wayne! I haven’t seen you in such a long time!”

First of all: THIS is the reason I hate weddings.

It was the wedding reception of one of my dearest friends. After a splendid ceremony where I had connected with many old friends, my partner and I seated ourselves for the reception dinner. It was an assigned seat and I’d be there for the next two hours at least. They were just starting to pour the champagne.

“Hey Wayne! I haven’t seen you in a long time!”

There he was, in the seat beside me: the father of one of my long-term child clients. I hadn’t seen him in several years, since I transitioned his son to another therapist when I moved to a different state.

He had just buttered his roll. I had already sat down. There really was no escape.

My friend, who obviously didn’t know this guy was my client, thought we would have so much in common.

I garbled my words, mumbled hello, and introduced my spouse. Ugh. But I didn’t introduce him to her. I was stymied. With dinner guests within earshot, I didn’t want to reveal anything about our confidential relationship. After an awkward pause, he introduced himself to her.

Why are these encounters so unnerving? There are many valid reasons we psychotherapists want to avoid them. One of our paramount roles as therapist is to protect the client’s confidentiality and to guard the specialness of the therapeutic bond. We don’t want them to feel awkward and exposed.

But there are some causes for discomfort, maybe less conscious, that we should explore within ourselves. Loss of our carefully crafted therapist persona; loss of the clearly defined roles that can make our job relating to clients more prescribed and thus easier; revelation of parts of our lives that aren’t always in our control (e.g. encounters with my cranky children in grocery stores); and exposure of our humanness in all its potential sloppiness.

If I had to be stuck next to a former client for two hours, this would be the guy I’d choose. He didn’t care if people around us knew his son had been in counseling with me. He was grateful for my support during a difficult time. While I didn’t say too much during that dinner and I focused mostly on the guests on the other side of the table, I have to admit, I’m glad I sat by him. I was deeply gratified when he showed pictures on his phone of his son. He was one of those kids who, when I saw him in counseling, really had me worried about his future. He had been through a lot of trauma at a young age. Here were pictures showing he had grown up into a goofy, smiling teenager. His dad was so proud.

How often do we get to see how clients whom we loved counseling end up later in their lives? What started as an awkward encounter, ironically, turned into a gift of sorts.

Later this year I’ll be offering my workshop, “Clinical Ethics in Close Quarters,” twice, once in Eugene and once in Portland. You’ll get 6 CEUs for ethics. Please join me!

Nice and very real; some of my greatest clients could have been friends if I had been, say, in a different profession, so it’s hard in other ways to feel so close to some people yet not be able to relate more naturally. Good article.
From another therapist.